Russian Defense: Eliminating 200 terrorists in strikes by aerospace forces on their bases near Palmyra 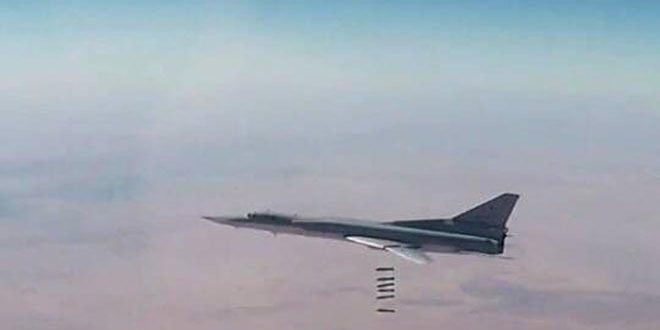 Moscow, SANA- Russian Defense Ministry announced Monday that Russian Aerospace Forces aircrafts have destroyed a base for training terrorists near Palmyra city, killing about 220 terrorists, noting that the terrorist organizations are planning to carry out terrorist practices in Syria to destabilize it.

Rear Adm. Alexander Karpov, Deputy Head of Russian Coordination Center in Hmeimim said in a press statement that there is information about that terrorist organizations have established terrorist base northeast of Palmyra, in addition to producing handmade explosive devices and creating terrorist groups to dispatching them to several areas in the country to carry out terrorist operations there.

Karpov added that after confirming the data about the terrorists’ positions, Russian Aerospace Forces aircrafts carried out airstrikes, asserting that they eliminated two hideouts and up to 200 militants, 24 four-wheel drive vehicle equipped with machineguns, as well destroying 500 kg of ammunition and raw materials for producing hand-made explosive devices.

The Russian Military Official noted that terrorist groups are planning to launch terrorist operations and attacks on the Syrian State’s institutions in several cities to destabilize the country before the Presidential elections on May 26th.

He indicated to that training the terrorists is taking place in camps affiliated to them on areas that are not controlled by Syrian State, including al-Tanf area held sway by US occupation troops.

2021-04-20
rafah
Share
Previous Shulgin: The West accusations against Syria on use of chemical weapons fabricated, motivated by geopolitical interests
Next QSD militia kidnaps a number of civilians in Deir Ezzor countryside