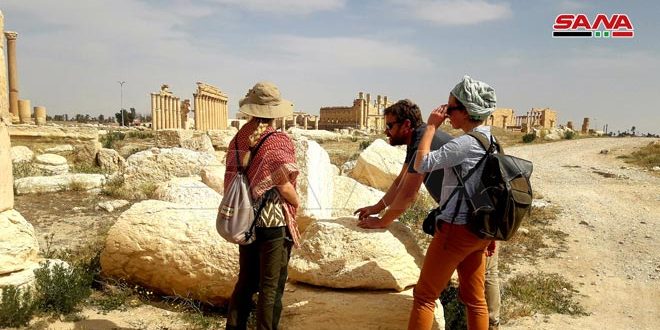 Damascus, SANA-Director of “Stone Industry Association” in Russia , Dmitri Mediansev, said the restoration works for archaeological Arch de Triumph in the city of Palmyra will start on November 12th,2021. “ During the past two days, some field actions were done.. we inspected the site and undertook outlining projects in cooperation with General Directorate of Antiquities and Museums in Syria,” Mediansev said in a press statement to SANA following a meeting held between Syrian ruins experts and their Russian counterpart at National Museum of Damascus.

He added that the Russian experts’ team comprises special engineers in the fields of reconstruction, restoration and three-dimension photography.

The Russian expert expressed appreciation for sharing in this “humanitarian and civilizational project that boosts exchange of experiences between the two countries to restore the archaeological heritage site of Palmyra.”

Director of Excavations and Archaeological Studies at General Directorate of Antiquities and Museums, Hammam Sa’ad, pointed out to cooperation with the United Nations Educational, Scientific and Cultural Organization ( UNESCO ) to form a scientific commission to show their expertise and help the two teams work in line with international criteria adopted for the restoration of antiquities.

2021-04-10
m.eyon
Share
Previous Syrian community in Russia calls for removing coercive measures imposed on Syria
Next American website: Washington to re-employ one of arms of al-Qaeda in Syria