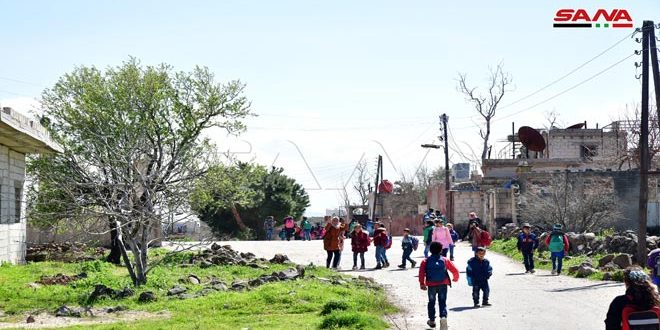 Quneitra, SANA- Along the highway of al-Salam road connecting Damascus with the liberated city of Quneitra, there are scenes that document what has happened during the ten-year hostile war on Syria, on the contrary, there are features about the return of life to the orchards and fields on both sides of the road.

Scenes of farms and olive trees spread among the rainy pools along the northern countryside of Quneitra and sounds of picks at orchards affirm that life is gradually returning to this terror-liberated countryside.

In Ufaniya village, teacher, Ali Yassin, says that since the return of normal life to the area in 2018, the people have rushed to help rehabilitate the schools, the farmers began working in their fields and the workers returned to their factories and shops.

Engineering units at the Syrian Arab Army, in cooperation with competent authorities and the citizens dismantled mines planted by terrorists in agricultural lands and at the entrances of the villages and towns in order to preserve the lives of the people.