Mikdad: Some countries exploit Conference on Disarmament to liquidate accounts against countries that do not share their hostile policies 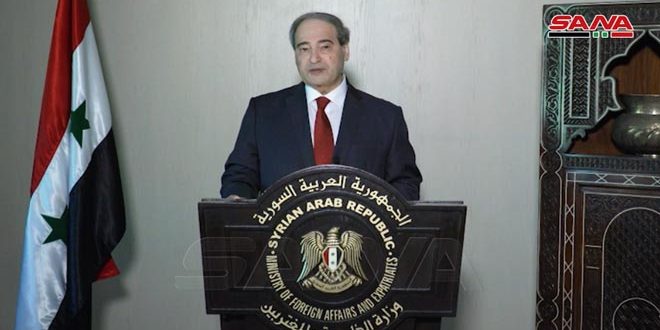 Geneva, SANA- Foreign and Expatriates Minister, Fayssal Mikdad, stressed that some countries try to exploit the forum of the Conference on Disarmament to liquidate their accounts against states that do not share their hostile stances and policies.

Mikdad added that during the latest years,, those countries didn’t stop at impeding return of the conference to practice its role, but they have sought to undermine the credibility and role of the mechanisms which have been established according to agreements that have been negotiated in the conference.

Mikdad, in a speech via video before the high-level session of the conference on Disarmament, said that the politicization of the work of the Organization for the Prohibition of Chemical Weapons (OPCW) has led to distance it from its tasks which were defined by the Convention on the Prohibition of Chemical Weapons and constituted a threat to its credibility and future.

He indicated that the US-western pressures on the technical secretariat aim at turning the organization into a tool to target a member state at the Convention and serve the geopolitical interests of the US, the only party in the convention which continues to possess chemical weapons since the World War II till now.

Mikdad indicated that Syria gives great importance to the conference as the only multilateral negotiating forum concerned with disarmament, expressing Syria’s commitment to cooperate with the efforts of the presidencies that respect professionalism, the principles of neutrality and impartiality and the provisions of the rules of procedure in their endeavor to activate the work of the conference based on its agenda.

Mikdad stressed the necessary to preserve the conference role, nature and mandate.

He affirmed Syria’s support for negotiation in the conference a binding, unconditioned and irrevocable international legal instrument that provides effective guarantees against the use of nuclear weapons or the threat to use them against Non-Nuclear Weapon States and subject to their complete elimination.

Mikdad affirmed Syria’s support for negotiation in the conference a binding, unconditioned and irreversible international legal instrument that provides effective guarantees against the use of nuclear weapons or the threat to use them against non-weapon states and subject to their complete elimination.

He  added that with the escalating concern about the changing of space into an arena for new race of armament, Syria renews support for the draft treaty proposed by Russia and china regarding non-proliferation in the space.

Mikdad affirmed that Syria  welcomes the initiative of Russian President, Vladimir Putin, which led to the announcement of the agreement to extend the (New START) Treaty for extra five years without preconditions.