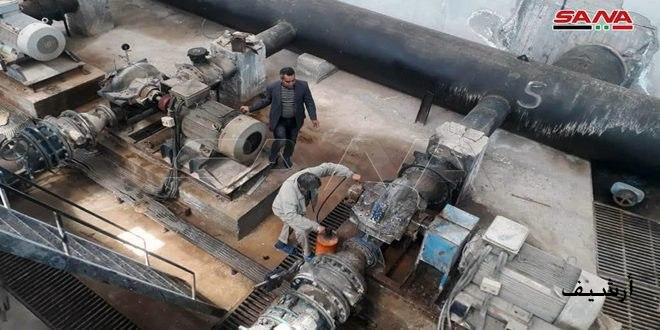 Hasaka, SANA- Technical workshops at the Water Company in Hasaka started the maintenance works of the main water pumping line which feeds a number of neighborhoods in Hasaka City after it has been broken and went out of service.

Director of the Company Eng. Mahmoud al-Okla told SANA in a statement on Tuesday that the main water pumping line feeding al-Nashwa al-Gharbiya, al-Sharia, al Villat and the Youth housing neighborhoods has been broken on Monday evening and the pumping of water for the subscribers has been stopped, asserting that the maintenance works have been launched today to put the line into service again as soon as possible.

Al-Okla pointed out that the maintenance workshops are maintaining at the same time the water pumping branch which feeds Ghweiran Shraqi and Gharbi neighborhoods therefore the pumping of water has been transferred from the southern neighborhoods sector of the city to the eastern neighborhoods, including al-Aziziya, al-Salihiya, al-Mufti and al-Talaea till the two aforementioned lines be fixed.

The Water Company divided Hasaka city and the surrounding neighborhoods into five sectors as water is pumped throughout the day to each sector alone.