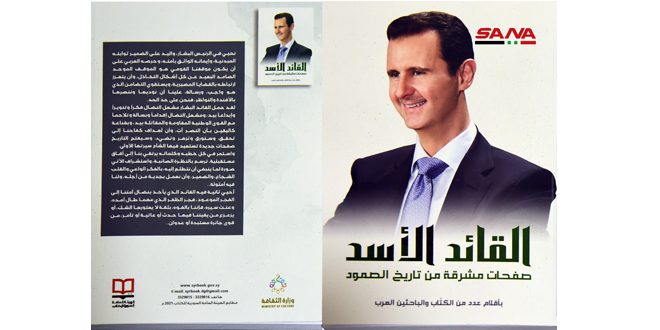 Damascus, SANA- A book titled “Leader al-Assad, Shining Pages of Steadfastness History ” included testimonies from a group of Syrian and Arab writers, politicians, military strategists and religion scholars who highlighted the stances of President Bashar al-Assad, his firm constants and his leadership of the country amid difficult circumstances.

In her presentation of the book, Vice President of the Republic, Dr. Najah al-Attar, noted that “President al-Assad carried the torch of the struggle with deep thought, great enlightenment, creativity, audacity, courage and cohesion with the forces of national resistance with a conviction and certainty in victory.”

The 544-page high-volume book was published by the Syrian General Book Authority and it includes articles by 28 Syrian, Palestinian, Jordanian, Lebanese, Egyptian, Tunisian and Moroccan figures.

Among the figures who left their testimonies in the book are:

– Head of the Lebanese People’s Movement and one of the most prominent founders of the Progressive Arab Front, Lebanese politician Najah Wakim.

–  Assistant Secretary-General of the Arab-Islamic Gathering to Support the Option of Resistance, Dr. Gamal Ali Zahran, from Egypt.

– Assistant Secretary General of the Union of Arab Lawyers Samih Khreis., from Jordan.

– Member of the Syrian Constitutional Committee, the writer Anisa Abboud.

The testimonies addressed the rich events that Syria and the nation have experienced, coinciding with the leadership of the country’s president al-Assad since the year 2000 and his support for the Arab resistance movements, his defense of Syria, his confrontation of the aggression launched against Syria, his firm stance towards Palestine, and regarding the conflict with the Zionist entity, and his belief in Syria’s leading Arab role as well as his leadership of Syria in exceptional stages.