25 civilians martyred, 13 injured in terrorist attack on their vehicle on Deir Ezzor-Tadmur Highway 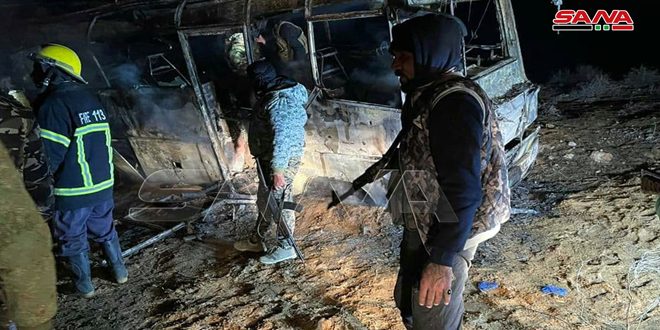 Deir Ezzor SANA-  25 civilians were martyred and 13 others were injured due to terrorist attack on their vehicle in Kabajeb area on Deir Ezzor-Tadmur Highway.

SANA reporter said that in 16:00 p.m. a Pullman has been targeted by terrorist attack on Deir Ezzor-Tadmur Highway in Kabajeb area, causing the martyrdom of 25 civilians and the injury of 13 others, adding that the injured persons were admitted to Deir Ezzor hospitals to receive treatment.

Terrorist cells affiliated to Daesh terrorist organizations are positioning in some areas of al-Badia under the support of the US occupation forces which are occupying al-Tanf Area near the Syrian, Jordanian and Iraqi borders.