US occupation helicopters carry out an airdrop, kidnap 3 persons in Deir Ezzor countryside 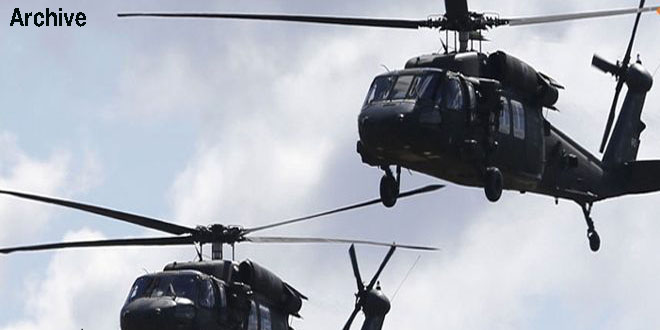 Deir Ezzor, SANA- In the framework of their aggressive policies, the US occupation forces on Sunday carried out an airdrop on al-Shuhail town in Deir Ezzor eastern countryside and kidnapped three citizens from the same family in cooperation with QSD militia which works under its command.

Local sources told SANA that a number of US occupation’s helicopters on Sunday at dawn, carried out an airdrop on al-Kitif neighborhood at the center of al-Shuhail town in Deir Ezzor eastern countryside, after the town has been completely cordoned off by the “QSD” militia, and they kidnapped three persons from the same family.

Over the last months, Deir Ezzor countryside has witnessed popular demonstrations calling for the expulsion of US occupation and QSD militia which has gone far in its aggressive practices through looting their properties and besieging a number of villages and towns, in addition to arresting dozens of youths and targeting the dignitaries of the tribes and pillaging the resources of al-Jazeera region.

kidnap 3 persons in Deir Ezzor countryside US occupation helicopters carry out an airdrop 2020-10-25
ruaa-jazaeri
Share
Previous Several fires extinguished in Tartous , Lattakia and Homs countryside
Next Autumn weather prevails across the country, yet temperatures above average