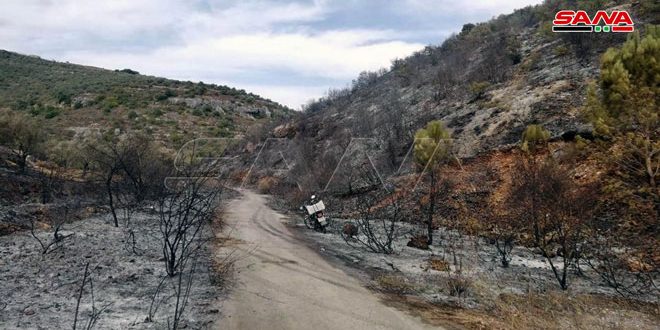 Tartous, SANA-Tartous firefighting brigade, in cooperation with members of forestry department in Tartous agricultural directorate, have extinguished the fire erupted on Saturday morning in the lands of al-Suda town in the province countryside.

Commander of the Tartous firefighting brigade, Colonel Samir Shamma, told SANA reporter that 9 firefighting engines participated in extinguishing the fire which devoured wide areas of the agricultural lands and forestry lands, indicating that the fire was cordoned from all directions while the members of the forestry department were deployed in the area to put out the fire. The firefighting teams spare no efforts in cordoning off and extinguishing a fire which was erupted on Saturday morning in al- Suda area in Tartous countryside, as they have extinguished, in cooperation with the locals and the Forestry Department of Tartous Agriculture Directorate three fires broke out at dawn in the Agricultural lands and forests in different areas in the province.

Colonel Shamma, told SANA reporter that the fires were erupted in Dwair Raslan, Hossen Suleiman, Al-Shaykh Sa’ad and Dwair Taha  , pointing out that  Al-Shaykh Sa’ad fire devoured a group of olive trees, and in Hossen Suleiman  and in Dwair Raslan wide areas of agricultural and forestry lands were damaged by fires, while the damage in Dwair Taha  was limited to a group of herbs .

Shamma called upon the citizens to be careful and not to ignite any fire in the Agricultural lands in order to prevent its spreading into neighboring lands and cause losses. For his part, head of the Forestry Department in Tartous Agriculture Directorate, Eng, Hassan Nassif pointed out that Dwair Raslan fire, which has erupted at dawn on Saturday, was extinguished after two hours in cooperation with locals and firefighting teams.

He added that two firefighting teams headed to al-Suda town to help in extinguishing the fire there.