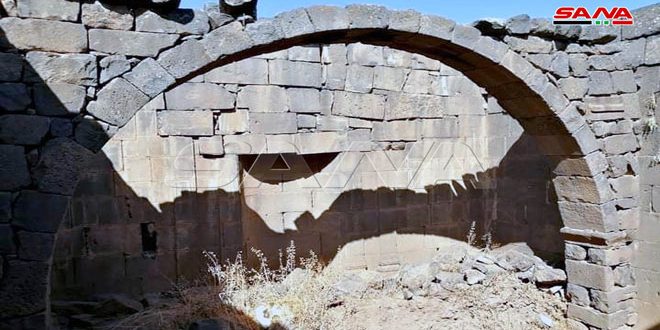 Sweida , SANA –Archeological Buraika temple was built by Roman emperor of a Syrian origin , Severus Alexander, who took reign between 222 and 235 AD and is considered one of the unique architectural monuments that still in a good status up till now. The temple is located in the middle of Buraika village in the south eastern side of al-Lajat volcanic, rocky region and to the northwest of Sweida city, according to archeologist , Hasen Hatoum .

The temple, of 9 meters length in and 8 meters width, was established above terrace which was existed with a stair through which any one can go up and it is still in acceptable archeological status.

Hatoum added that residents of Buraika village in the ancient times worshiped a lot of Syrian, Greek and Roman Gods and a number of Greek writings, which were awarded to “the God Cronus,” were found in the village.

The village of Buraika is located 14 km to the northwest of Sweida city and it is it 895 meters above sea level.

2020-10-19
hybah
Share
Previous Update-QSD militia storms civilians’ houses, kidnaps a number of them in Raqqa and Deir Ezzor countryside
Next Transport Ministry: Two flights to be run weekly onboard of Syrian Airlines from Damascus to Doha and vice versa