Update-QSD militia storms civilians’ houses, kidnaps a number of them in Raqqa and Deir Ezzor countryside 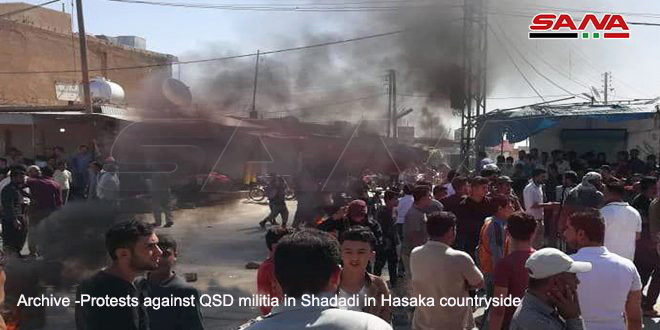 Raqqa, Deir Ezzor, SANA- The US occupation-backed QSD militia has kidnapped a number of civilians in Raqqa and Deir Ezzor countryside in continuation of its criminal acts and repressive measures in the areas where they spread in the Syrian al-Jazeera region.

Local sources said that armed groups affiliated to QSD militia stormed a number of the civilians’ houses in Tabqah city, 40 km to the west of al-Raqqa city, and kidnapped a number of youths to forcibly recruit them at the training camps and to make them fight among its ranks later.

To the north of Raqqa City, the sources noted that a QSD group kidnapped three civilians after storming a house om Sakir village and it took them to unknown destination.

QSD militia continues the operations of kidnapping the locals in the eastern countryside of Deir Ezzor as its militants have stormed into al-Baghouz town and they kidnapped one of the locals after encircling the town and searching the houses and the passing cars.

QSD militia seizes a number of police residence in Ghuwayran, threatens civilians to expel them from their homes

Meanwhile, The US occupation – backed QSD militia seized a number of police residence houses in Ghuwayran neighborhood in Hasaka and demanded the residents to leave their houses and insulted a number of women living there.

Local sources told   SANA reporter in Hasaka that a militants affiliated to QSD militia, among of them armed women, besieged two houses at the police residence in Ghuwayran neighborhood and forcibly evacuated the residents and insulted several women living there.

On Sunday, QSD militia kidnapped three young men while raiding one of the houses in al-Nashwieh al-Gharbia neighborhood to the west of Hasaka City center for unknown reasons.