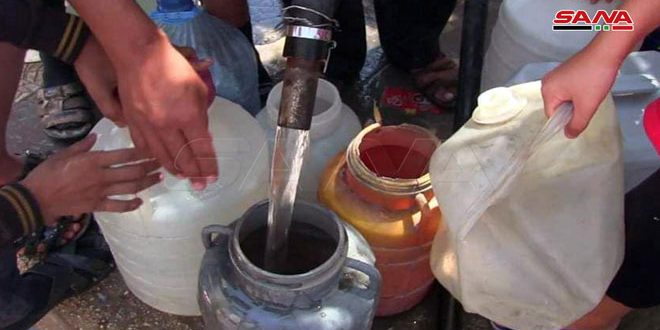 Hasaka, SANA- For the 8th day in a raw, Turkish occupation and its terrorist mercenaries in Ras-al-Ayn countryside continue to stop the operation of Alouk water project and to cut off drinking water from Hasaka city, threating one million persons with thirsty and let them suffering from repercussions of the spread of Coronavirus (COVID-19).

Speaking to SANA, General Director of Hasaka Water Establishment Mahmoud Ukla said that efforts to reoperate  Alouk Water Station have failed, adding that the suffering of the locals continues in light of the increase of temperatures and demand for water, particularly that there is no alternative  for Alouk water station in sight. Ukla added that the locals are supplied with water through tanks that are distributed by the government and others affiliated to the humanitarian organizations from Kinfasha, Tal Barrak and al-Hemmeh, asserting that the wells that are digged by the efforts of the locals are not suitable for human consumption, but for household use.

He asserted that the only solution to the water situation in Hasaka is the expulsion of the Turkish occupation from the station and to hand it completely to the workers of the establishment, reiterating that the continuation of the problem will turn it to “a humanitarian catastrophe that threatens the life of a million people”.

The cutting of water and the blackmail status adopted by the Turkish occupation in Hasaka area is considered as a “humanitarian crime” against one million people locating along the water line from Alouk station to Hasaka and its countryside. The locals in Hasaka city called on the international organizations to interfere to find a permanent solution to the problem of drinking water in Hasaka.

For his part, geologist and specialist in water affairs Aziz Michael said that Alouk station at the current time is essential for water and it should be reoperated, calling for expelling the Turkish occupation from it.