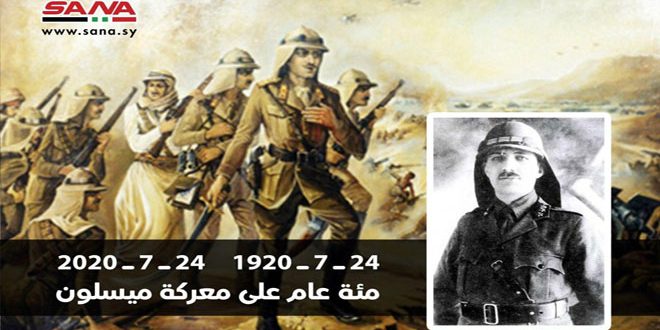 Damascus, SANA- The Battle of Maysalun, which was led by Commander Yusuf al-Azma on July 24th , 1920, marks a milestone in the history of Syria and region, furthermore, it paved the way for the culture of resistance against occupation until the evacuation of the colonizer.

The centennial anniversary of the battle of Maysalun comes today to bring to mind the day when the martyr Yusuf al-Azma and his companions faced the French occupation forces with the unrivaled courage.

The Battle of Maysalun included about 4000 fighters and volunteers under the command of al-Azma who faced the French occupation army, which included 10,000 troops, led by Henri Gouraud, yet martyr al-Azma and his fighters advanced with courage and fought in this battle with pride and dignity.

The Battle of Maysalun remains to this day a bright flame for the Syrian army in confronting terrorism, which has been targeting Syria for more than nine years with support of Western and regional countries aimed at undermining Syria’s unity and sovereignty and its independent decision ,but the Syrians will inevitably be victorious as they have triumphed throughout history.