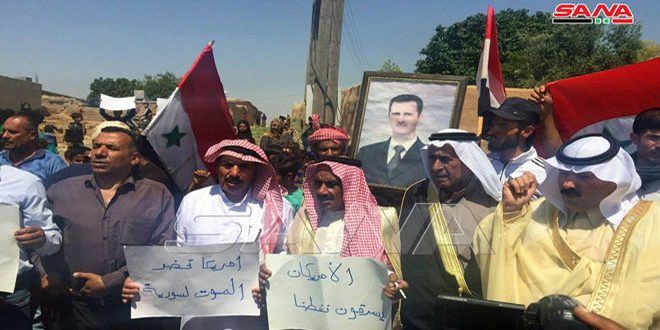 Hasaka, SANA- SANA reporter said that the locals in Tartab village in al-Qamishli countryside demonstrated against US occupation, demanding withdrawal of occupation forces from Syria.

Several areas in al-Jazeera region witness demonstrations in rejection of the illegitimate presence of the US occupation forces and the stealing of the oil and other resources of the country in cooperation and collusion with their tools which they support in these areas.

The participants raised slogans calling for stopping the theft of Syrian oil by the occupation forces and the groups that are affiliated to them and for the need a popular support and the unification of all efforts in order to resist any occupation and force it out of Syrian territory, affirming their rejection of the so-called “Caesar Act.”

They stressed that their message to the world is that the Syrian citizens will not calm down until the US occupation leave and the Syrian territories will be liberated from the occupation forces.