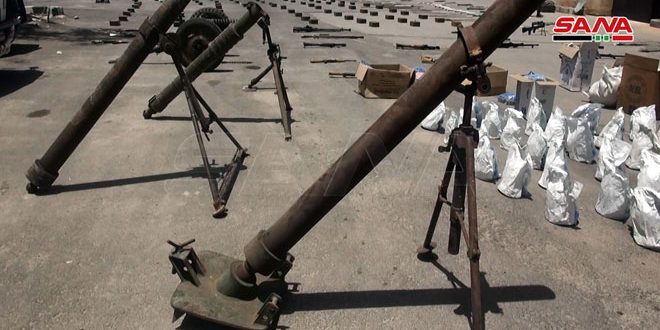 Damascus Countryside, SANA – The authorities found weapons, ammunition, and medical supplies, some of which made in the West, that had been left behind by terrorists in the southern region.

A source from the authorities said that while combing areas liberated by the Syrian Arab Army from terrorism in the southern region, the authorities, in cooperation with locals, uncovered a large amount of weapons and ammunition including dozens of various ammunition boxes, rifles including M16s, US-made sniper rifles, RPG launchers, machineguns, mortar launchers, and a 4WD vehicle equipped with a DShK machinegun.

The source added that the items found included a large assortment of medicine and medical equipment, some of them made in the West.