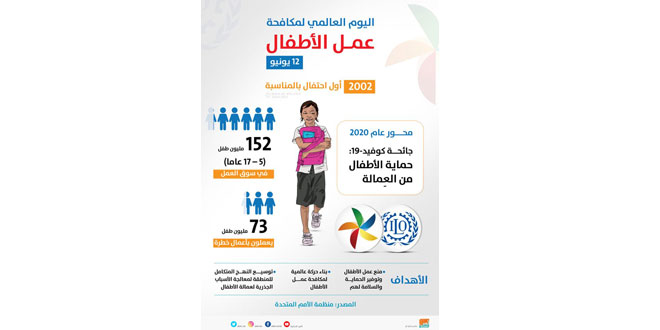 Damascus, SANA- The World Day Against Child Labour, observed on June 12, focuses this year on the effects of the COVID-19 pandemic on the progress that had been achieved in the field of eliminating the phenomenon of child labor, as international efforts seek to eliminate this phenomenon by 2030, while UN statistics state that there are 152 million children in the labor market, 72 million of them engaged in hazardous work.

In Syria, the efforts of government and NGOs are ongoing in a bid to eliminate this phenomenon which had increased during the years of the terrorist war on Syria, which has had various negative effects on children such as dropping out of schools, exposure to violence in all its forms, losing familiar care, involvement in beggary, and being recruited by armed terrorist organizations, the latter two being the worst kinds of child labor according to international classifications.

In a statement to SANA, the Director of the Social Services Department At the Social Affairs and Labor Ministry Maisaa Maidani said the Ministry is carrying out a case management program for handling various social phenomena and issues including child labor, with focus on dealing with the causes of this phenomenon, in addition to forming a committee for helping children who fall victim to violence, human trafficking, and recruitment.

Maidani pointed out that the Ministry if finishing up the procedures for issuing the law of child rights, which is in its final stages.

In a similar statement, the Director of the Family Issues Department in the Syrian Commission for Family and Population Affairs Rana Khleifawi said that the Commission has prepared a national plan for combating all forms of child labor and protecting them from violence, and it continues updating all the related data and completing field studies about the reality of child labor in the work environment, the kinds of work children are doing, and the economic situation of their families.

She added that the they have finished a field study about the reality of children labor in Hasiaa area in Homs and the industrial zone in Damascus, while similar studies are still being conducted in other areas.

Khleifawi said that the results of these studies will contribute to finding solutions and making response plans to tackle this phenomenon, in addition to help empower children by helping them remain in schools and empower their families economically.

She also said the Commission is updating its 2020-2030 early childhood strategies.