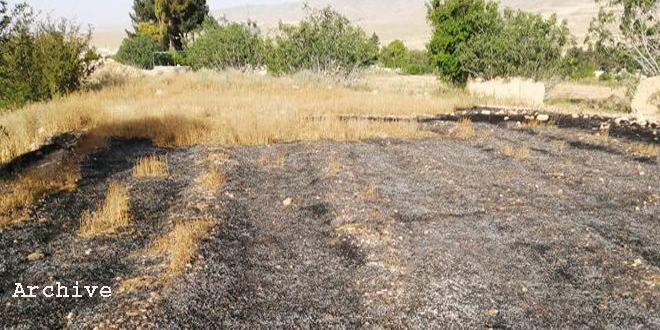 Daraa, SANA- Daraa Firefighting Brigade has put out eighteen fires which erupted on Wednesday in the agricultural lands and forests in several areas in the province.

Commander of the firefighting brigade Mohammad Mahamid told SANA reporter that some of the erupted fires has destroyed areas cultivated with wheat in Nahta, al-Yadouda, Kahil and al-Tayba.

Mahamid added that some fires erupted in areas of dry grass and forests in Daraa City, in addition to the eruption of fires in some houses in Daraa and Saida town.

He noted that most of the fires have erupted in the dry grass and they later expanded to reach the nearby tress or the wheat fields, calling upon citizens to stop removing grass through burning it in order to preserve the agricultural season.

Mahamid said that the firefighting brigade in cooperation with several bodies in Daraa province are in a state of high alert.

The fires that broke out in Daraa province during the current agricultural season have devoured 300 dunums of wheat, barley and fruit trees until yesterday evening.