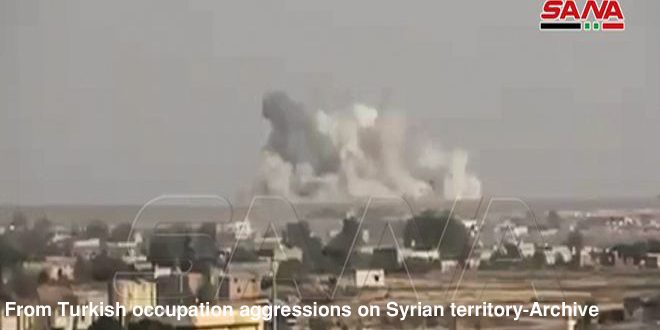 SANA reporter in Hasaka said that the Turkish occupation and its terrorist mercenary positioned in the villages of Daoudia, Tal Mendel and Eneeq al-Hawa, using various types of weapons, attacked villages in Tal Tamer district in the northeastern countryside, causing material damage to citizens’ houses and properties.

Meanwhile in Ras al-Ayn area, six terrorists were killed and four others were injured as a result of infighting between two terrorist groups affiliated with the Turkish regime, namely “Ahrar al-Sharqiya” and “Squad 20” which had lasted throughout the past two days.

Since its aggression on the Syrian lands on the ninth of last October, the Turkish regime and its mercenary of terrorists have carried out criminal operations against the people and destroyed the infrastructure and service facilities, causing the displacement of civilians towards the cities of Hasaka and Qamishli.