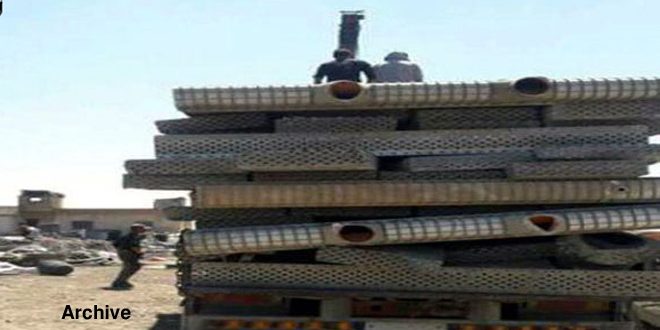 Idleb, SANA_ Civil sources revealed that groups of “Jabhat al-Nusra” terrorists and terrorist groups affiliated to it looted metal pipes from peasants’ lands in al-Ghab area near the administrative borders with Idleb.

The sources mentioned that terrorists of the so-called “Turkistan Party” carry out excavation and sabotage the agricultural lands in their deployment areas in al-Ghab, northwestern Hama countryside, to remove the metal pipes of irrigation and smuggle them through brokers for sale in Turkey.

In a related context, the civil sources said that al-Nusra terrorists dismantled what remains of Zayzoun power plant and Idleb textile factory to sell them at an auction to locals and Turkish scrap metal dealers.

Several years ago, terrorists of “Jabhat al-Nusa” looted equipment and supplies in Zayzoun power plant and smuggled them across the villages and towns in the southwestern countryside of Idleb province into the Turkish territory.