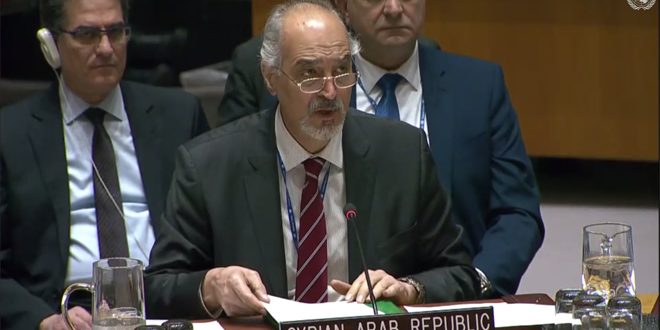 New York, SANA-Syria’s permanent representative to the UN, Dr. Bashar al-Jaafari, said on Thursday that some countries seek to turn Security council into a platform for NATO to support the Turkish aggression on Syrian territories, and this undermines the international organization’s role in keeping world peace and security.

Al-Jaafari added at a Security council’s session on the situation in the Middle East that the UN undersecretary general for humanitarian affairs violates his custody and tries to defame Syria through the misleading campaign he practices about the reality of situation in the country.

He went on to say that securing Aleppo city completely by the Syrian Arab army has given its citizens feeling of security as their city came out of the range of terrorism and spite shells.

Al-Jaafari affirmed that Syria calls on countries that have dominance on the Turkish regime and the affiliated terrorist organizations to oblige them to allow a million of Syrians, who were forced to flee the acts of Turkish aggression, to return home.

“Syria, committing to the security and safety of its citizens and after taking many initiatives to open humanitarian corridors, invited its citizens, who left their home in the areas that were liberated from terrorism in the northwestern part of Syria to return to their residential houses, providing them with the requirements of good life,” al-Jaafari said.

He added that cooperation between Syria and its partners of non- governmental foreign organizations, national civil associations and the UN has enabled it to continue providing the humanitarian aid, social support, medical care and basic needs to millions of Syrians.

Al-Jaafari expressed Syria’s disappointment with the world Health Organization’s delay in delivering the medical shipment pending in Iraq though it has received the acceptance of the Syrian state to enter it through al-BouKamal crossing point.

He said that it is possible to offer humanitarian aid in Syria’s northeastern regions in cooperation and coordination with the Syrian government away from attempts of politicizing the humanitarian work.

“Syria stresses once again its categorical rejection of any Turkish or foreign illegitimate presence on its lands and calls for reining the Turkish hostile acts and its support to terrorism in Syria,” al-Jaafari said.

He added that the Turkish Regime President and UN representative have no right to talk on behalf of the Syrian people, as this regime continues supporting terrorism in Syria and attacking its lands.

2020-02-27
m.eyon
Share
Previous Army units carry on fierce clashes with Jabhat al-Nusra terrorists on Saraqeb axis in Idleb countryside
Next Turkish regime admits killing of 33 of its soldiers, injury of 32 others in Idleb