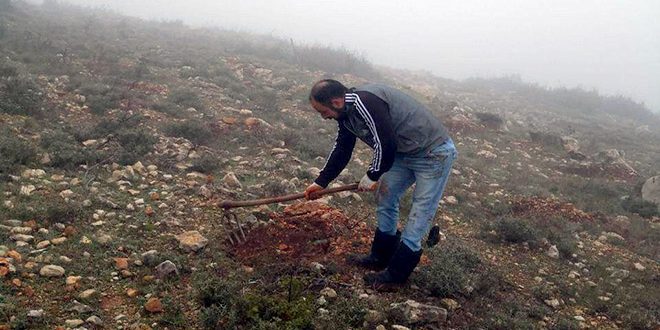 Damascus, SANA- With a single leg and a strong will and determination, wounded Pilot Capt. Ali Mohsen has launched an initiative under the title “Syria Becomes Beautiful with its Trees, Our Wounds Are Fruitful”.

The initiative aims to plant five thousand saplings at the burnt forests and lands in several provinces, and to raise awareness among all citizens on the importance of vegetation to be a message of love and loyalty to the heroes of the Syrian Arab Army who sacrificed to defend the homeland.

Wounded Capt. Ali told SANA that the individual initiative was launched on December 5th last year as 4600 saplings have been planted in the framework of the initiative over an area estimated at 70 Dunums in al-Kafir area in Massyaf.

Ali noted that planting the saplings will continue till reaching 5000 saplings in accordance with the weather conditions, and under the auspices of the Ministry of Agriculture and the supervision of engineers from the Department of Massyaf Forestry.

He added that after accomplishing that initiative, a new “collective” campaign that includes most Syrian provinces will be launched in cooperation with the General Sports Federation and sectors of the civil society to accomplish and plant as much saplings as possible as it will include areas in the provinces of “Hama, Homs, Tartous, Lattakia and Damascus Countryside” and other sites that will be determined later, calling on everyone to participate in this initiative.

Earlier Captain Ali went in a hiking trip from his village Bashnin in Massyaf countryside in Hama province till Damascus as he travelled over a distance estimated at about 240 km, and he had participated in Fazza International Para Athletics Championships which was held in Dubai.

It is noteworthy that Captain Ali was a fighter and pilot in the Syrian Arab Army who was wounded several times before losing his leg in the war on terrorism. He wants through his initiatives to convey a message to the world that his injury hasn’t been able to kill the will of life he has, as all Syrians who confirm day after day that they are able to overcome all challenges and to continue building and fortifying their homeland.