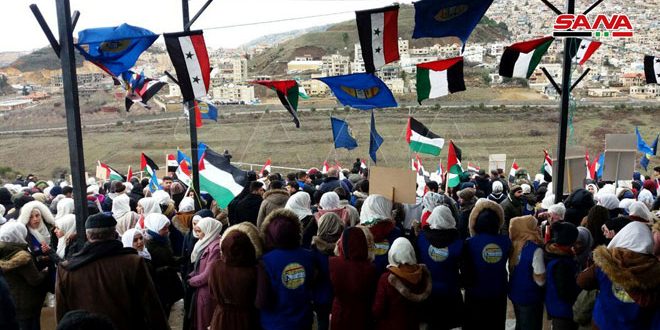 Quneitra, SANA-With an official and popular participation, a national event was held today in Ain Al-Tineh site, opposite to the town of Majdal Shams in the occupied Syrian Golan, on the occasion of the liberation of Dean of the Syrian Prisoners and the Arab freedom fighter Sudqi Suleiman al-Maqt and prisoner Amal Fawzi Abu Saleh from the prisons of the Israeli occupation.

Participants in the event, held by the Governorate of Quneitra in cooperation with the Revolutionary Youth Union and popular figures, emphasized that the liberation of the heroic prisoners from the occupation’s prisons is a victory for Syria and for the will to stand against the Zionist arrogance, especially that it coincides with the victories of the Syrian Arab Army in its battles against terrorism.

The participants affirmed their determination to complete the battle until the liberation of the entire occupied Syrian Golan.

A national event in Quneitra on occasion of liberating prisoners Sudqi al-Muqt Amal Abu Saleh 2020-01-16
ruaa-jazaeri
Share
Previous Lavrov: Combating terrorism in Syria must continue till eradicating it completely
Next Army Command: All possible efforts will be exerted to save civilians, evacuate them from terrorist-controlled areas