Parga: Cuba will continue to support Syria at international forums 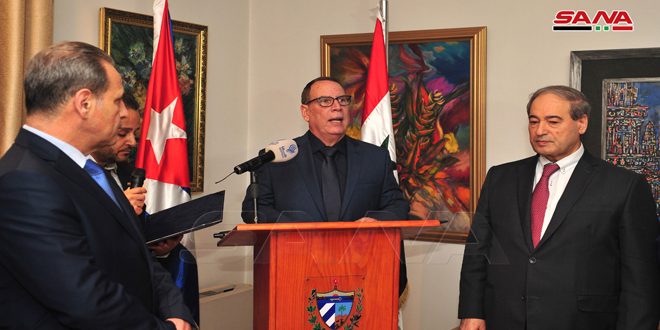 Damascus, SANA Cuban Embassy in Damascus on Wednesday evening held a reception ceremony at the residence of the Ambassador marking the 61 anniversary of the victory of the Cuban Revolution.

In a speech during the ceremony, Cuban Ambassador in Damascus, Miguel Porto Parga affirmed the depth of the historic relations binding Cuba and Syria which date back to more than 55 years.

The Cuban Ambassador asserted that his country will continue to support Syria at the international forum till restoring all of its territories and liberating them from terrorism.

Assistant Foreign and Expatriates Minister, Ayman Sousan, affirmed that the Cuban Revolution made Cuba an icon of steadfastness, indicating that the Cuban leadership and people have been struggling in the face of the unjust U.S. siege imposed on it from 61 years.

Sousan hailed Cuba’s stances and its firm standing by the side of Syria in the face of the conspiracy and the terrorist aggression launched against it, and its support to Syria at the international forums which is not strange as the two countries are facing the same war and aggression launched by imperialism which is represented by the U.S. in the worst of its forms.