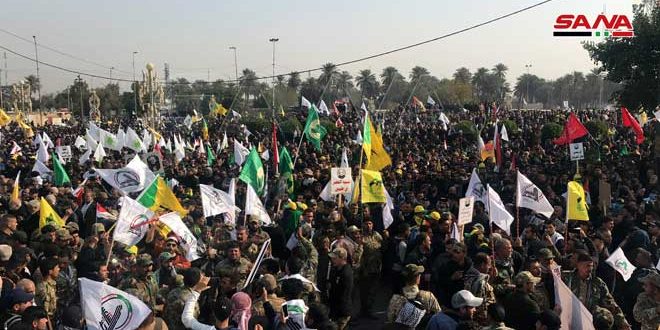 Baghdad, SANA- Thousands of Iraqi people participated on Saturday in escorting ceremony of the bodies of late leader of al-Quds Failaq, Lieutenant General Qassem Soleimani and deputy chairman of Iraqi Popular Mobilization Committee Abu Mahdi al-Muhandis in the Iraqi capital of Baghdad to their resting places.

On Friday, Lt. General Soleimani and al-Muhandis martyred in a US missile aggression on their cars at Baghdad airport road.

Iraqi media said that thousands of Iraqis gathered to take part in escorting Lt. General Solumani and al-Muhandis and the those who martyred in the US aggression, in al-Kazimiyeh neighborhood in Baghdad, chanting slogans in condemnation of the US aggression which targeted the martyrs’ cares.

Iraqi Prime Minister Adel Abdul Mahdi and a number of parliamentary members and leaders of the Popular Mobilization took part in the escorting ceremony.

The participants condemned the US aggression  which constitutes “a crime and a violation of Iraq’s national sovereignty”, demanding to cancel the security agreement with the US and expel US troops from Iraq.