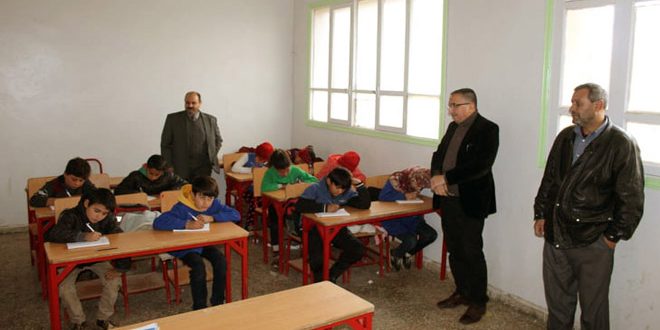 Idleb, SANA – Some 3980 students at 48 schools took first semester exam in Sanjar and Abu al-Dahour areas and Khan Sheikhoun countryside in the countryside of Idleb province which had been liberated from terrorism.

Inspecting the exam process in some of schools of the liberated areas in the province, Head of Idleb Education Directorate Abdulhamid al-Miamar met members of the administrative and teaching staff in the schools, pointing out to the exerted efforts which are resulted in successful exams.

The first semester exams of Basic and Secondary stages for 2019- 2020 started last Sunday.

Basic and Secondary stages first semester exam Idleb’s liberated areas 2019-12-18
admin
Share
Previous President al-Assad: Investing in cultural projects is the most profitable investment because it builds up a person who is armed with knowledge
Next Christmas decorations in Damascus – PHOTOS