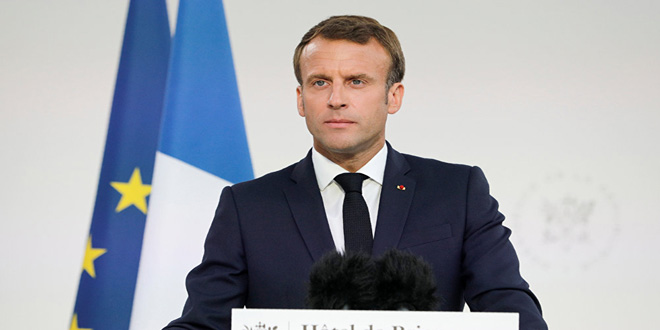 London, SANA- French President Emmanuel Macron affirmed that the Turkish regime forces are cooperating with terrorists affiliated to Daesh “ISIS” in their aggression on the Syrian territories.

In a press conference with U.S. President Donald Trump ahead of holding NATO Summit, AFP quoted President Macron as saying “When I look at Turkey, I see that sometimes it works with fighters affiliated to Daesh terrorist organization.”

He called upon the Turkish regime to provide clarifications on this during the NATO summit.

Observers point out that Macron’s statements, whose country has supported terrorists in Syria since the beginning of the crisis, and has contributed to their spread and to finding justifications for their crimes, come in an attempt to exchange roles and interests with terrorism backers, including the United States, Britain and the Turkish regime.

On the other hand, Macron stressed adherence to the description of NATO as “in a state of brain death” and said “I stick to those statements,” which Trump deemed “very humiliating” for the alliance.