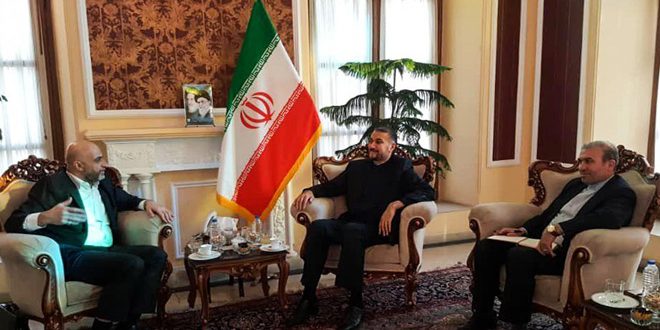 Tehran, SANA-Hossein Amir Abdollahian, Assistant Speaker for International Affairs at Iran’s Shura Council, renewed his country’s support to Syria’s sovereignty and territorial integrity, and its support to Syria in its war against all forms of terrorism.

Meeting Hussein Ragheb, member of the People’s Assembly and Deputy Chairman of the Syrian Iranian Parliamentary Friendship Association, Abdollahian hailed the victories achieved by Syria in its war against terrorism and its backers which would contribute to realizing security and stability in the region.

For his part, Ragheb underlined the necessity of enhancing bilateral relations, particularly the parliamentary ones in a way that would support the process of unifying joint visions with regard to the standing challenges and means of confronting them.

He indicated that activating the work of the Syrian-Iranian Chamber of Commerce will further enhance economic cooperation between the two sides in the face of the economic terrorism which targets the two countries.

Ragheb highly appreciated Iran’s standing by the Syrian people in the face of the terrorist war waged against their country.

The two sides also discussed means of activating the work of the Syrian-Iranian Parliamentary Friendship Association in a way that would be positively reflected on the Syrian and Iranian peoples.

They also expressed their rejection of any foreign interference in the works of the Committee of Discussing the Constitution. 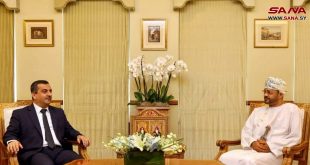