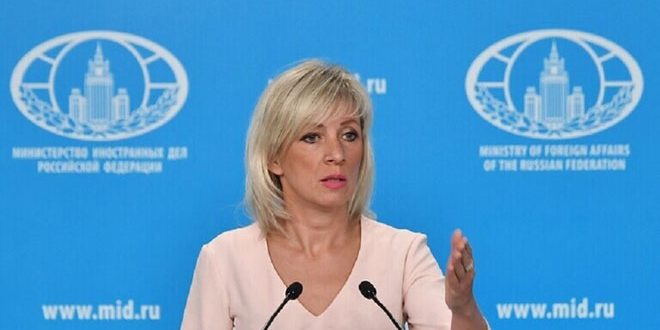 Moscow, SANA- Russian Foreign Ministry Spokeswoman Maria Zakharova said that the so-called “White Helmets” group, which claims that it is a humanitarian organization, together with the terrorists have been preparing new provocations with the use of chemical weapons in Syria.

Sputnik quoted Zakharova as saying in a press statement on Friday that “New confirmations of the information about the White Helmets’ activities emerge all the time … According to the existing information, which the Syrian government regularly provides to the United Nations, the White Helmets, jointly with terrorists, are preparing new chemical provocations in Syria. They obviously aim at disrupting the peace process in the country.”

Zakharova added that at present, the White Helmets are working near Idleb , and cooperating with Jabhat al –Nusra terrorist organization.

Zakharova said that Washington is smuggling oil from oil wells in northeast Syria , considering this as illegal action.

“Bypassing their own sanctions, the Americans are smuggling oil from Syria worth over $30 mln per month and are not going to leave these areas in the near future,” Zakharova noted.