Mikdad: Turkish aggression is an invasion of Syrian territories… Syrian Army ready to confront all challenges 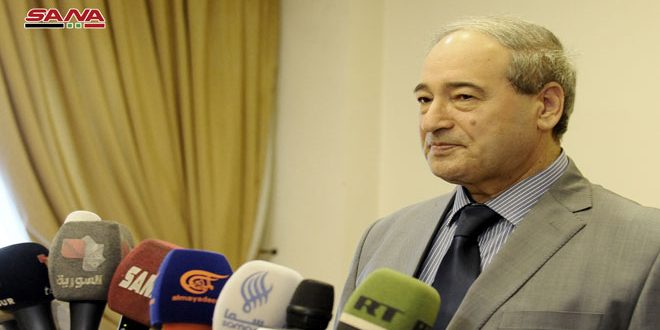 Damascus, SANA-Deputy Foreign and Expatriates Minister, Fayssal Mikdad, described the hostile war launched by the Turkish regime on Syrian territories as “invasion,” saying that attacking a sovereign, independent country is considered as an outrageous act against the UN charter and international law which flagrantly contradicts Security Council relevant resolutions.

“The Syrian Arab Army, which confronts the terrorist organizations, will confront the foreign invading forces which are present illegitimately on the Syrian territories and it is ready to face all challenges to which Syria is exposed,” Mikdad said in a press statement at the HQ of Foreign Ministry. 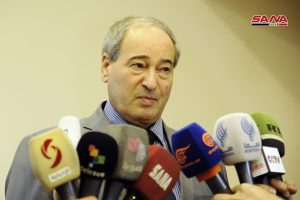 He added that the history will hold Head of the Turkish regime, Erdogan, responsible for being a war criminal who has perpetrated all crimes against the Syrian people.

“A liar and a reality forger has no right to claim that he defends the Syrians or accuse the others of crimes he has perpetrated against the Syrian people, Mikdad said.

Mikdad affirmed that the Syrian army has confronted the Turkish aggression on Syria since the beginning of the terrorist war on the country in a lot of sites and it fought the terrorists who were supported and armed by the Turkish regime.

He held the Turkish regime responsible for displacing the Syrians from their lands as it has perpetrated crimes against them through its terrorists and mercenaries, but, the Syrian state has been and still is committed to all its citizens and their return, without preconditions, to villages and towns in Syrian al-Jazeera.

On whether there are any contacts in order to pave the way for the entry of the Syrian army to Syrian al-Jazeera regions or not, Mikdad  stressed that the Syrian government has made discussions with all its citizens and expressed, as from the beginning, readiness to make necessary reconciliations, but, the armed powers in that region rejected all attempts and insisted to pave the way, directly or indirectly, for the Turkish occupiers to invade north of Syria.

“The Turkish aggression on the Syrian territories makes Turkey in a position that doesn’t differ from Daesh terrorist organization and many other terrorist groups,” Mikdad said.

He affirmed that the Turkish aggression on Syrian territories will have political repercussions and impacts on the political process in Syria, saying that the international community and the UN should  halt this aggression, deter it and make pressures on the Turkish regime to withdraw its  army in order to run the political process and the work of the constitutional committee, unless, it will face a lot of obstacles while Turkey threatens to occupy Syrian territories.

Mikdad concluded by affirming that Syria, with its heroic army, will defend each Syrian citizen wherever he was in the framework of its legitimate right according to international law and UN conventions.