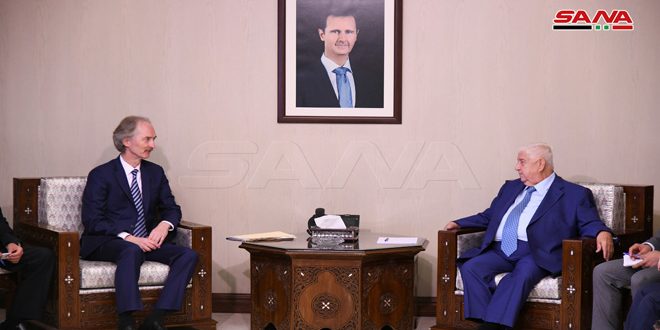 Talks during the meeting discussed the remaining issues which are related to forming the constitutional committee and the mechanisms and measures of its work in a way that would guarantee the performance of its role in accordance with clear measures which have been previously agreed upon and away from any foreign interference.

The meeting was positive and constructive as viewpoints agreed on affirming that the Syrian people only have the right to lead the constitutional process, underlining the necessity that the Syrians should decide their future without any interference or foreign pressures in a way that would guarantee the hoped-for progress in the political process so as to restore security and stability to all areas in the Syrian Arab Republic.

The two sides also affirmed the necessity of the full respect of Syria’s sovereignty, independence and territorial integrity and the rejection of all forms of terrorism.

Minister al-Moallem asserted Syria’s adherence to the political process, reiterating its readiness to continue cooperation with the Special Envoy to make his task in facilitating the Syrian-Syrian dialogue successful so as to reach a political solution led and owned by Syria in parallel with practicing its legal and legitimate right in continuing to combat terrorism according to the international law, the UN Charter and all Security Council’s resolutions which are related to Syria.

For his part, Pedersen presented a briefing on the outcomes of his meetings over the past period, hailing the progress realized in the political process.

He affirmed readiness to exert the required efforts to contribute to facilitating the Syrian-Syrian dialogue and to achieve the aspired-for outcomes.

2019-09-23
ruaa-jazaeri
Share
Previous Guterres announces the formation of a committee on discussing the constitution
Next Bogdanov, Haddad discuss relations between Syria and Russia