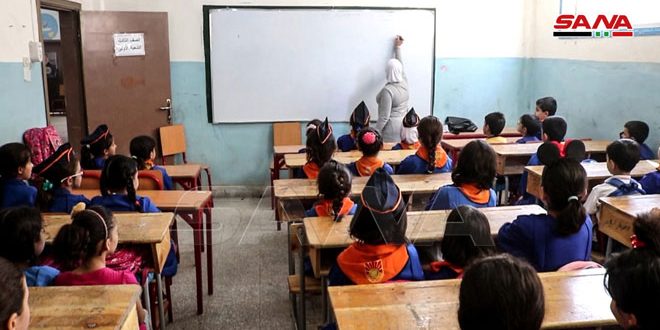 Deir Ezzor, SANA- In light of the notable increase in the number of the families which have returned to their areas in Deir Ezzor, the schools in the province at the beginning of the current school year received more than 128 thousand students amid a state of security and stability after rehabilitating a large number of schools which have been sabotaged at the hands of Daesh (ISIS) Takfiri terrorists.

The beginning of the educational process this year has been distinguished from the previous years  as a large number of schools were rehabilitated in the areas whose locals have been deprived of education for about four years as terrorists prevented the children from going to the governmental schools and they tried to impose different backwards teaching methods that spread the Takfiri mentality.

Head of the Educational Directorate in Deir Ezzor Khalil Haj Obeid affirmed that the Directorate has finished all the required preparations for ensuring the success of the educational process in the province.

Obeid added that the schools in the province have received about 128 thousand students with an increase in their number estimated at 17 thousand in comparison with the past year.

He indicated that the number of schools in the province reached 310 with an increase of 42 schools in comparison with the last year.

For their part, the students expressed happiness for returning to their schools after they have been deprived of pursuing their education over the past years due to the terrorism, highly appreciating the sacrifices of the Syrian Arab Army’s personnel  who have sacrificed to liberate every inch of the Syrian territories from terrorism.