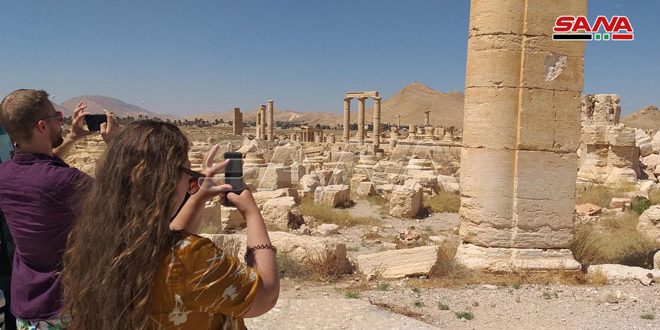 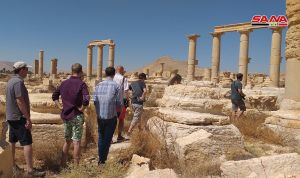 The tourist group documented the acts of sabotage and destruction which had been caused to historical monuments and tourist facilities of Palmyra due to crimes committed by Daesh(ISIS)terrorists before were crushed by the Syrian Arab Army.

Speaking to SANA reporter, tourist Robin from Britain expressed deep sorrow over the sabotage that targeted the most prominent historic features of Palmyra, pointing out to the safety and security which the tourists have touched in everywhere they visited ,and this contributes highly to the return of tourism to this city.

Meanwhile, Sarah, a teacher from New Zealand, also voiced deep sorrow over destruction caused to these cultural archeological sites at the hands of the enemies of humanity.

Nicolas, a lawyer from Canada, expressed pride for visiting Palmyra, in which he imagined the artistic performances that were held in the archeological amphitheater when he visited it, especially the great artistic and theatrical performance that was presented on the occasion of liberation of the city by the Syrian Arab Army.