The Syrian army shoots down drone, eliminates terrorists in countryside of Hama, Idleb 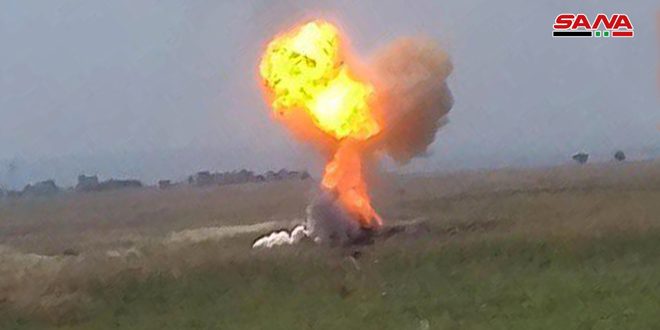 Idleb, Hama, SANA _ The Syrian Arab Army has shot down a drone for “Jabhat al-Nusra” terrorists of in the vicinity of Hama military airport.

SANA reporter said that the army anti-aircraft on Saturday shot down a drone launched by terrorists before reaching its target, adding that the drone is supplied with rockets containing high-explosive materials and equipped with GPRS  controller and a shell launch system.

In response to the repeated rocket attacks by terrorists positioned in the de-escalation zone targeting safe villages and towns and military points in Hama countryside, the army units launched a series of strikes on positions of  al-Nusra terrorists  and their supply routes in the countryside of Hama and Idleb.

SANA reporter said that  the army units targeted with artillery and missile fires groups of al-Nusra terrorists in the vicinity of al-Naqeer village in the southern countryside of Idleb as the groups were heading via SUVs vehicles equipped with machineguns towards al-Habbit town near the northern parts of Hama Province.

SANA reporter added that many vehicles were destroyed and a number of terrorists were killed as the remaining vehicles retreated.

In the northern countryside of Hama, the army artillery fires targeted movements of al-Nusra and “al-Ezza Brigades” terrorists on the direction of al-Jabin town and their supply routes from Kafar Zeita and al-Latamina towns, where many of the terrorists were killed and their vehicles were destroyed.

On Friday, the army strikes killed and wounded a number of terrorists and destroyed rocket launch-pads for them in the outskirts of Kafar Zeita and al-Latamina in northern Hama and al-Mastouma and the vicinity of Jabal al-Arba’een in southern Idleb.