Al-Moallem: Trump’s resolution will not affect the status of Golan 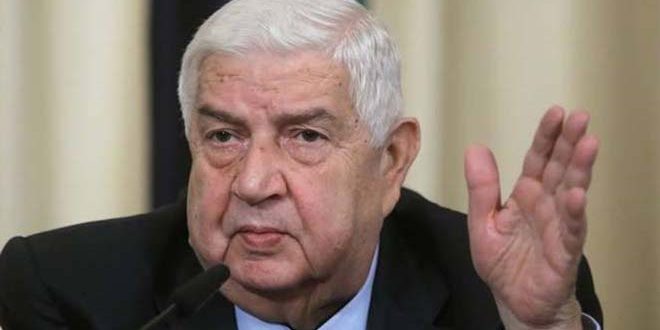 Damascus, SANA-Deputy Prime Minister, Foreign and Expatriates Minister Walid al-Moallem said that US President Donald Trump’s resolution will not affect the status of the occupied Syrian Golan, adding that Golan is immune by its citizens, the Syrian people, the army and the international UN resolutions.

“The US decision will affect nothing, except the isolation of the US,” al-Maollem told Syrian TV in a telephone call on Monday responding to a question about the impact of Trump’s step on the status of Golan.

As for Trump’s stance and its repercussions on the region, al-Moallem said that no one can predict what “that pirate is doing,” he and his administration have proven that they are a factor of instability and a factor of hegemony on the international community, he has started with Jerusalem, but here regarding Golan, he can’t do anything as the land is a property for its people.

On international reactions which reject the US step, al-Moallem said that undoubtedly, we could rely on these reactions as they are the international public opinion which adhere to the UN resolutions.

Syria has stressed its categorical rejection of US president Donald Trump’s resolution which recognizes the annexation of the occupied Syrian Golan to the Zionist entity, saying that the step represents the highest degrees of contempt for the international legitimacy and a blow to the international community.