“The Veto” documentary exposes misleading media throughout war on Syria 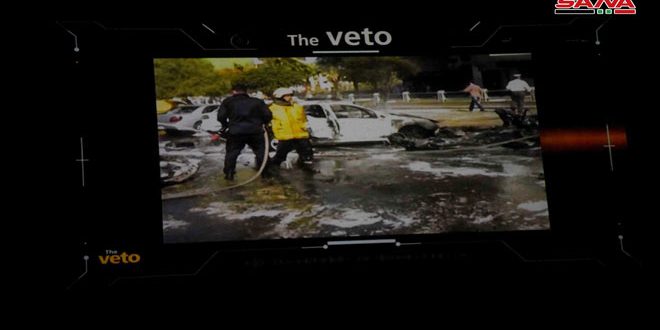 Homs, SANA- A political documentary titled “The Veto” by British Journalist  Vanessa Beeley which sheds light on some secrets and details  Homs City went through during the terrorist war waged against it  was screened on Monday on stage of Homs Culture House.

The documentary, filmed by Abdul-Mun’aim Arnous, exposes media lies against Syria through showing what had been plotted against the country behind the scenes, particularly in Homs City to be later displayed by the misleading Western and Arab media claiming that they are real.

The documentary  whose length is about an hour and half talks about the attempt by the West to use the Security Council as a tool to exert pressure on Syria, and to consequently form international groups to impose economic and military pressures on the country.

The film also shows the reaction of the West  which stood against Russia and China due to their stances in support of Syria and what it has done to preserve its sovereignty and territorial integrity.

The film explains how events were fabricated to use them later against Syria, and it was screened at the Security Council and it was distributed among the journalists working at the council, in addition to screening it in Oslo.

The original language of the film is English, and it has been translated into seven languages with the aim of conveying a message to the West showing that some states were using the terrorist groups, and the so-called “White Helmets” and others to exert pressure on Syria at the Security Council.