After week of its eruption, liquidation war among terrorists rages in Idleb southern countryside 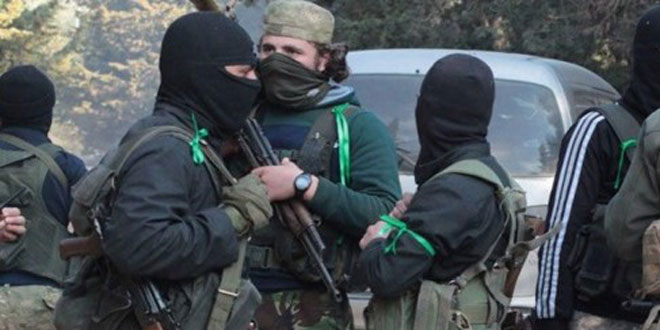 Local sources from Idleb southern countryside said that Jabhat al-Nusra terrorist organization has brought huge military reinforcements and deployed them in vicinity of the positions of the so-called “National Front” and the allied Takfiri factions in the area.

Meanwhile, terrorists of “Ahrar al-Sham Movement” and the so-called “National Front for Liberation” launched an attack against Jabhat al-Nusra’s positions in the town of Hish in the same countryside.

The sources said that “A number of civilians including a woman were injured due to the clashes between the terrorist organizations on the axis of the towns of Hish, Babila and al-Habit in Idleb southern countryside.”

The areas in which the fight erupted between terrorists also witnessed operations of storming into the houses and intimidating civilians as terrorists of “Ahrar al-Sham” Movement broke into the houses in Idleb southern countryside.

The local sources said that the locals in Kafrouma town were forced by terrorists of the so-called “National Front for Liberation” to express solidarity with terrorists in the town in the face of Jabhat al-Nusra terrorists in a time when the locals in these areas want to avoid the fight in their villages and towns and they reject the presence of any terrorist organizations in them.

After week of its eruption liquidation war among terrorists rages in Idleb southern countryside 2019-01-09
ruaa-jazaeri
Share
Previous Shulgin: The West seeks to make OPCW a tool to undermine the political solution to crisis in Syria
Next Ryabkov: Officials at US Administration insist on keeping illegitimate military presence in Syria