Weapons, ammo and medicines left behind by terrorists found in Quneitra countryside 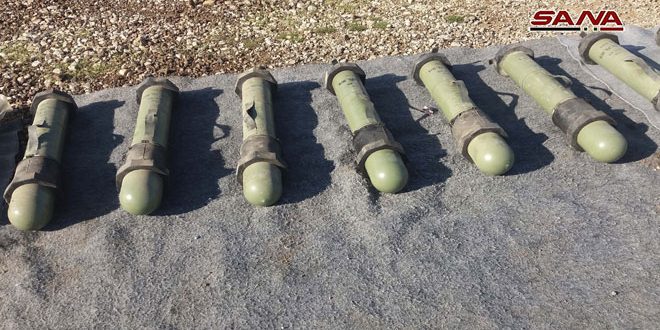 Quneitra, SANA- While combing the areas liberated by the Syrian Arab Army, authorities found huge amounts of weapons and ammunition, some of which are Israeli-made and US-made to the west of Jibbat al-Khashab town in Quneitra northern countryside.

SANA’s reporter in Quneitra said that authorities continued operations of combing the areas which had been liberated from terrorism by the Syrian army in Quneitra countryside to remove the explosive devices and mines left behind by terrorists to protect the lives of civilians.

The reporter added that authorities in cooperation with locals found amounts of ammunition and weapons, some of which were Israeli-made, US-made and Jordanian-made in the vicinity of the barbed wire with the occupied Syrian Golan to the west of Jibbat al-Khashab town in the northern countryside of the province.

The reporter indicated that the weapons were hidden inside dens dug by terrorists underground as they included anti-tank missiles, mortar launchers, rifles and machineguns, in addition to a large number of protective masks, landmines, satellite broadcast devices and huge amounts of ammunition, machineguns and rifles.

An armored vehicle, medicines and medical equipment for surgical operations, some of which are Israeli-made and Western-made left behind terrorists were also found while completing the process of securing the southern area after liberating it from terrorism.