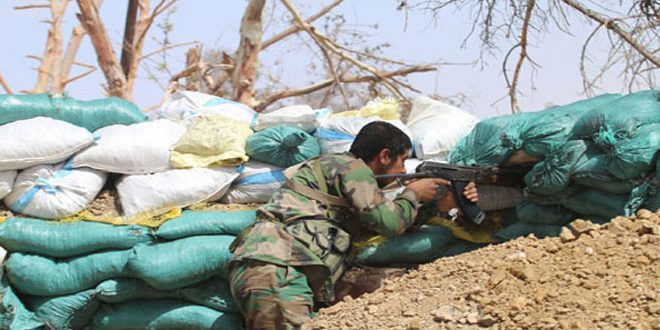 Hama, SANA_ A unit of the Syrian Arab Army on Saturday foiled a terrorist group’s infiltration attempt towards a military point in the far northwestern countryside of Hama.

SANA reporter said that an army unit centered in the vicinity of the village Bredij 7, north-east of the al-Sakilibiya town, tracked the movement of a terrorist group trying to infiltrate towards a military point from the direction of Tel Sakher in the northern countryside of Hama.

The Army unit responded with light machineguns and thwarted the terrorists’ attempt, inflicting heavy losses upon them in personnel and equipment and forcing the rest to fled away, the reporter added.

On Friday, Units of the Syrian Arab Army thwarted terrorist groups’ infiltration attempts towards the safe areas and army points on the outskirts of the demilitarized zone in Idleb from several directions.