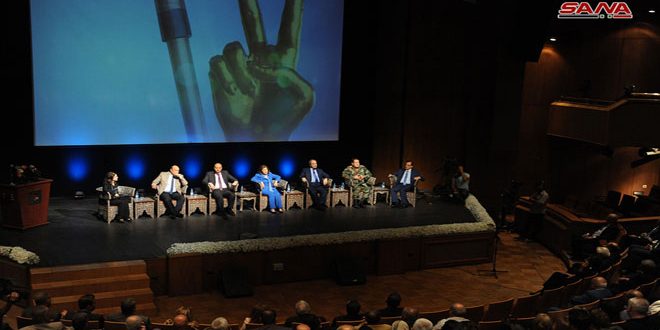 Damascus, SANA- Participants in the Media forum, which is held within the activities of the second Syrian Media Festival at Dar al-Assad for Culture and Arts in Damascus, concentrated on the role of Syrian media to coup up with victories of the army and face misleading campaigns against Syria. Information Minister Imad Sara reviewed the phases of media conspiracy against Syria during the crisis, starting from fabricating lies and followed by destroying the infrastructure, hospitals and schools.

He affirmed that in spite of all the means of media conspiracy that were utilized for it, the terrorist war didn’t affect the steadfastness of the national media.

For her part, Presidential political and Media adviser, Bouthaina Shaaban, said that Syria struggle against the conspiracy and terrorism has fully changed the political scene, whether in regards to stances or to the concepts. She added that all what has been broadcast in the western and US media comes in the framework of the media war against Syria and “we have to fortify ourselves against it through reading realities.”

Deputy Foreign and Expatriates Minister Fayssal Mikdad, on his part, said the war that was launched on Syria was “a step of anticipation to make a new reality and assault our causes and history.”

He added that the Syrian diplomacy was directly or indirectly a reflection of the progress gained by the Syrian army.