Sabbagh: Syria determined to return all displaced citizens to their homeland 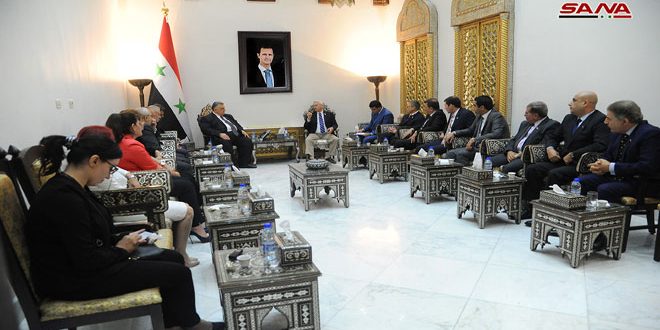 Damascus, SANA – Speaker of the People’s Assembly, Hammoudeh Sabbagh, stressed the Syrian state’s keenness on the return of all its displaced people, saying that Syria is determined to fulfil reconciliations and continue its efforts to eliminate terrorist hotbeds as well.

Sabbagh made his remarks during a meeting with US Senator Richard Black who is currently visiting Syria.

He pointed out that eradication of remaining terrorist hotbeds is a priority for the Syrian state in preparation for reconstruction stage, adding that the Syrian Arab army’s heroic sacrifices and the faith of Syrian people and their confidence in their leadership played a key role in achieving victory over terrorism and its supporters.

For his part, Senator Black expressed confidence that Syria is in the final stage of battle against terrorism, indicating that the US support to those who fight against the Syrian state in Idleb is considered as support to those who killed thousands of American citizens in the September 11 attacks in 2001.

He stated that the unilateral coercive procedures imposed by some western countries on Syria are a crime and a breach of international laws. The US diplomat added that during the tour, he felt the citizens’ commitment to reconciliations and their desire to return to their houses and areas which they were forced to leave due to terrorism.

Black visited Ma’aloula city and met a number of orphaned children who receive care at the Monastery of Our Lady of Seydnaya.

He regretted the US approach which is mainly intended to spread sectarian sedition among the Syrian people who lived in peace and security for centuries.