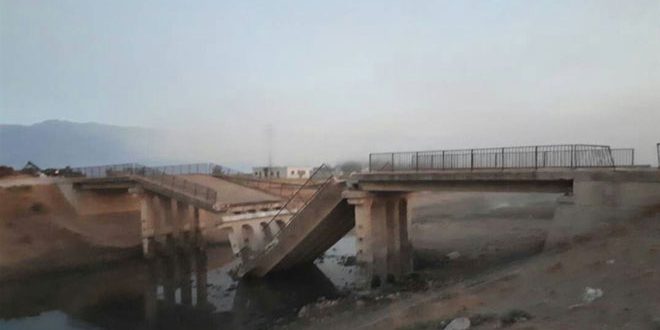 Hama, SANA-Terrorist organizations in Hama destroyed during the past few hours two bridges in the northwestern countryside of the province.

SANA’s reporter in said that terrorists of Jabhat al-Nusra and the “Turkistan Party” destroyed two bridges in the towns of al-Sharia and Beit al-Ras in al-Ghab plain.

The reporter pointed out that the targeted bridges are two of the most important and large ones in the northwestern countryside of Hama linking between the towns of al-Sharia and Beit al-Ras and neighboring villages and towns.

2018-08-31
Manar
Share
Previous Army destroys fortified points for Daesh in Sweida Badyia
Next Lavrov: The Syrian government has sovereign right over its territory