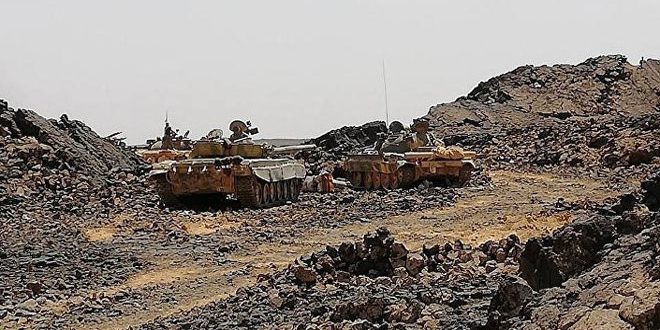 Sweida, SANA-Units of Syrian Arab Army carried out destroyed fortified points for Daesh (ISIS) terrorists in the area of Toloul al-Safa in Sweida Badyia (desert) and thwarted terrorists’ attempt to flee towards al-Tanf area on the outskirts of the Badyia nearby the Syrian-Iraqi border.

SANA’s reporter said that the army’s artillery targeted dens and sites for terrorist groups positioned in Toloul al-Safa area, killing and injuring scores of terrorists in addition to the destruction of their fortified points.

The reporter added that army enhanced its points on the northern and western parts of Toloul al-Safa area, tightening the noose on Daesh remnants.

Another army unit launched intensive strikes on movements of a terrorist group that was attempting to infiltrate towards the rocky cliffs to escape from the army’s grip.

The infiltration attempt was frustrated and a number of terrorists were killed or injured due to the strikes.