Foreign Ministry: Combating terrorism is responsibility of the Syrian state 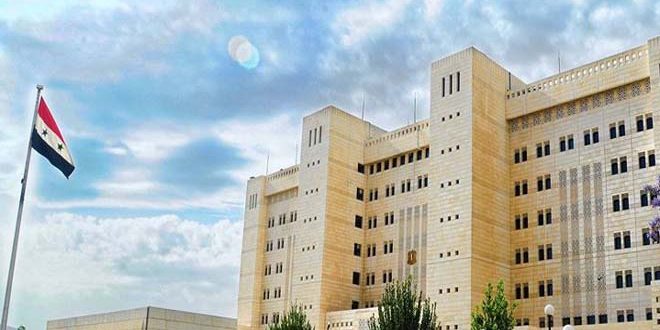 Damascus, SANA-Syria affirmed on Thursday that combatting terrorism, particularly Daesh and Jabhat al-Nusra, and other affiliated terror groups, is a basic responsibility assumed by the Syrian state, adding that war on the rest of terrorists, including those in Idleb, is Syria’s inevitable duty.

“The Syrian Arab army and the supporting forces have proved that the achievements fulfilled in the war against terrorism had led to meet the appeals of millions of Syrians to rescue them from the flocks of Daesh,” An official source at Foreign and Expatriates Ministry said in a statement commenting on a press statement issued by UN Secretary General on the situation in Syria.

The statement added that when the Syrian state assumes its duty, it does so to protect its citizens from crimes of terrorists, adding that Syria is the most committed side to protect the lives of its citizens.

“Syria reaffirms that the terrorist organizations are the ones who used chemical weapons against civilians in Syria, supported and covered by western media,” the Ministry said.

“Syria stresses once again that the use of chemical weapons in the country has always been done for justifying the western countries’ aggressions on Syria every time these states feel that their schemes had failed,” the statement added.

It went on to say that Syria calls on UN General Secretariat to support the Syrian efforts to fight terrorism and face the western propagandas which became exposed in front of world public opinion, particularly as Syria implements UN Security Council resolutions relevant to counter-terrorism.

2018-08-30
Manar
Share
Previous Al-Moallem: Syria’s decision is to combat al-Nusra terrorists in Idleb, but priority is for reconciliations
Next Syrian government takes several procedures for the return of displaced