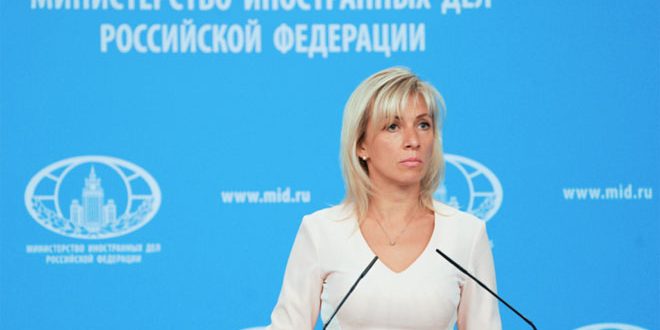 Moscow, SANA- Russian Foreign Ministry Spokeswoman Maria Zakharova called on Washington to fulfill its international legal obligations and withdraw its forces from Syria, reaffirming that their presence is illegal.

In a press conference on Thursday, Zakharova said that the Russian side has credible information that the US forces deployed in al-Tanf area, which includes al-Rukban camp, are fully aware of the presence of hundreds of Daesh (ISIS) and Jabhat al-Nusra terrorist organizations in the camp and are using the displaced as human shields.

She pointed out that Washington has not yet allowed the United Nations access to the camp to provide aid to the needy.

The Spokeswoman warned of the high frequency of terrorist provocations against the Syrian Arab Army and civilians in areas adjacent to the de-escalation zone in the province of Idleb, noting that the Russian air defense systems recently dropped 45 RC drones which were launched by terrorists from Idleb towards Hmeimim airbase in Lattakia.

The terrorist groups in Idleb recently conducted mass arrests of more than 500 people who called for local reconciliation, according to Zakharova.

Zakharova pointed out that the Syrian government continues to work to create conditions for the return of the displaced to their home, as thousands of them returned recently from Lebanon.