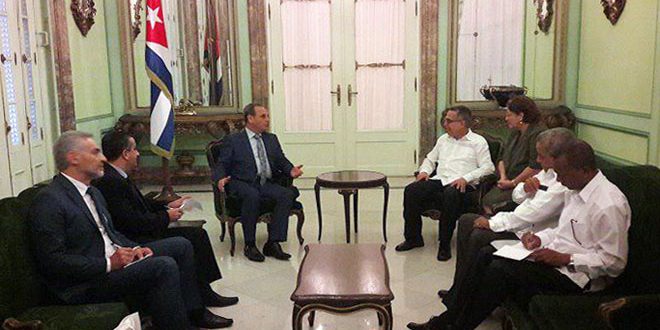 Havana,SANA_ Syria and Cuba have reviewed bilateral relations in various fields, especially in the health sector.

That came during a meeting of Health Minister Nizar Yazigi with First Deputy Minister of Foreign Affairs of Cuba Marcelino Medina in Havana Thursday.

Minister Yazigi said that his visit to Cuba comes within the framework of the common directions to enhance cooperation in health field and exchange expertise between the two countries, adding that the health cooperation with Cuba will witness an additional impetus.

Yazigi thanked Cuba for standing by Syria and its people in the face of the terrorist war waged on it.

For his part, Medina renewed Cuba’s support for Syria in all fields, expressing his great relief over the progress of relations between Syria and Cuba, which witnessed a great development recently.

Medina pointed out that the signature of medical cooperation agreement between the two countries will further strengthen the relations in this field.

He said that Cuba is ready to provide Syria with medical expertise.

Medina praised sacrifices of the Syrian Arab army and steadfastness of the Syrian people and their leadership in the face of terrorism, saying that he is confident that Syria’s victory is imminent.

Yazigi visited Havana’s Latin American School of Medicine (ELAM) and met with Rector of the school Dr. Antonio Lopez who made a presentation on the health education system in Cuba and praised the efforts of Syrian students studying in this school.

Yazigi met the Syrian students studying in ELAM and stressed the importance of giving the study and scientific achievement top priority for acquiring knowledge and experience to be put in the service of the homeland later.

Cuba health relations Syria 2018-07-05
ghossoun
Share
Previous The army tightens noose around terrorists in eastern Daraa
Next Vasilenko: Kazakhstan ready to continue to offer a platform for talks on Syria