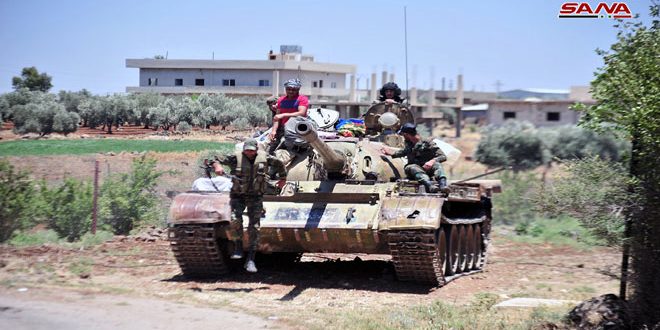 Following the liberation, the army’s engineering units started combing the area in order to dismantle mines and IEDs planted by terrorists before they fled towards neighboring areas. 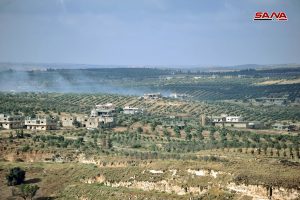 in the entire province of Daraa.

The hospital which is located on the outskirts of Alma town is a residential building with medicines from international organizations and regional countries that entered Syria illegally.

Speaking to SANA, a field commander said that army units used tactics compatible with the geographical nature of Alma town and fought violent clashes with terrorists who had barricaded themselves inside civilian 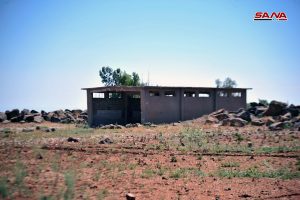 houses which they turned into command sites.

The commander added that the 24-hours battles resulted in the liberating of the town by the army’s heroes while terrorists fled through agricultural roads in the eastern countryside of the province.

The Army will continue its operations till eradicating terrorism in Daraa, the commander said.

Army units also regained control over the Air Defense Battalion /49/ which was turned by terrorists into one of their sites.

Another field commander indicated that the Battalion overlooked Damascus-Daraa International Highway and a number of neighboring towns and was used by terrorists to fire shells at the Highway and attack the army’s points in the area.

SANA’s war correspondent cited information indicating that militants in the villages of Um Walad, Jbib and al-Aslaha in the farthest eastern countryside of Daraa agreed to hand over their weapons and join reconciliation.

2018-06-29
Manar
Share
Previous US, French communication devices discovered by authorities in al-Sukhneh Badia
Next Foreign Ministry: Syria expresses deep concern over the blackmail and threats adopted by a group of Western countries to politicize OPCW work to use it as pretext for attacking sovereign and independent states by using excuses of chemical weapons