Ala: Syrian presidency of conference on Disarmament will seek transparency and Professionalism in its work 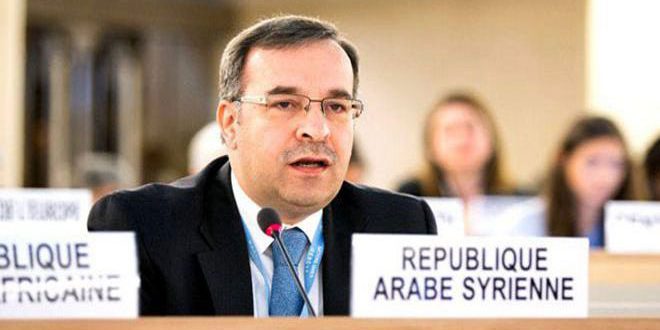 Geneva, SANA – Syria’s Permanent Representative to the United Nations in Geneva and President of the 2018 sessions of Conference on Disarmament, Ambassador Hussam Eddin Ala stressed that Syria firmly believes in the importance of this Conference as the sole multilateral negotiating forum for disarmament to achieve a nuclear-weapon-free world as well as guaranteeing the use of outer space for peaceful purposes.

Ala, chairing the first public session on Tuesday, said that the negotiations at the Conference remained deadlocked for over 20 years if taking into consideration the current impact of regional and international security environment and the complicated nature of issues within the conference’s specialization, not to mention the absence of a political administration that may lead it to achieve its objectives.

“It is regrettable that the US and its allies exploit this negotiating forum to plunge issues outside the conference’s mandate into its agenda and raise critical issues which require dealing with them according to their importance instead of using them as a subject for their propaganda,” Ala added.

He also regretted those states’ new step to undermine the forum’s efforts and violate its main principles, particularly the 3rd and 9tharticles which regulate the participation in its activities and the rotating mechanism among Member States.

The Syrian diplomat added that the attempts made by those states to confer a fake humanitarian touch to their stances that are based on crass political considerations, hypocrisy, double standards and moral selectivity in dealing with risks involved in the regional and international security environment.

He noted that the states which arouse the issue of complying with legal obligations should meet their legal obligations first, before giving lessons to others, in accordance with international treaties regulating the Treaty on the Non-Proliferation of Nuclear Weapons (NPT) and the Chemical Weapons Convention.

“Claims on preserving the mechanism of chemical weapons’ non-proliferation don’t align with those states’ determination to deal with suspected chemical attacks in a way that disregards the Chemical Weapons’ Convention and breaches requirements to conduct investigation into such incidents, not to mention their anticipation for investigations’ results and directing accusations that are groundless to justify their aggressions on sovereign states,” said Ala.

He noted that those states’ behavior and attempts to impede efforts exerted to reach a convention for the suppression of chemical and biological acts of terrorism don’t contribute to maintaining the regional and international security environment, meanwhile information about terrorist groups which try to possess and store toxic chemicals in order to use them in Syria and Iraq are being circulated.

Ambassador Ala pointed out that the miserable play arranged-for by some parties is a desperate attempt to undermine the Syrian presidency of the Conference on Disarmament.

“Syria is committed to principles of professionalism and transparency to deal with presidency’s requirements away from harmful practices and non-diplomatic discourse which will poison the atmosphere of cooperation among member states in a time when we truly need to positively and constructively work to bring the conference out of the state of deadlock.”

Ala concluded by saying that Syria is honored to assume the presidency of the Conference on Disarmament for the third time since joining it in 1996, renewing its adherence to principles of professionalism and transparency in dealing with member states, as well as its openness to all serious and constructive initiatives and contributions.