Students from US Houston University to Haley: You are an accomplice to terrorists 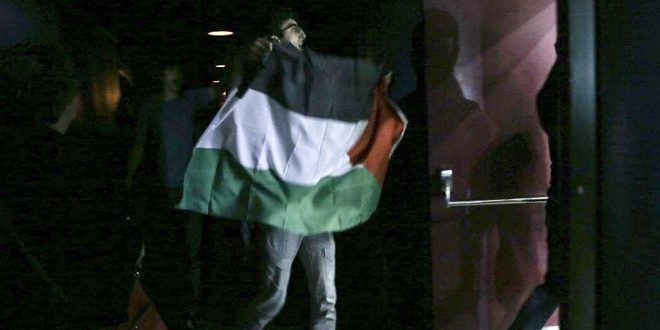 Washington, SANA – “The blood is on your hands! You are an accomplice to terrorists,” students from the US University of Houston said to the US Ambassador to the United Nations Nikki Haley, who spoke at the University.

Earlier, Haley defended the massacres of Israeli occupation entity and its crimes against the Palestinian people the last of which was its atrocities against the participants in “The Great March of Return”.

During the UN Security Council’s emergency session in the wake of the Israeli massacre against the Palestinian people taking part in activities of “The Great March of Return”, Haley strongly defended the Israeli entity and welcomed the so-called “self-restraint” practiced by Israel.

The video went viral online showing students interrupting Haley as soon as she spoke to them at the university where a student stood up and shouted at the top of his lungs: “Nikki Haley, the blood is on your hands! You continue to sign off on the genocide of a native people! You are an accomplice to terrorists and colonizers!”

​After that, dozens of students stood up and erupted in a call-and-answer chant across the auditorium, holding up Palestinian flags. They chanted “Nikki Nikki can’t you see? You are on a killing spree!” and “Nikki Haley you can’t hide, you signed off on genocide!”

Security personnel immediately responded and attempted to escort the protesters out of the auditorium.

The terrible massacre committed by the Israeli occupation forces against the Palestinians who took part in the activities of “The Great March of Return” resulted in the martyrdom of more than 100 Palestinians, including 65 in one day, in addition to the injury of about 6 thousand.