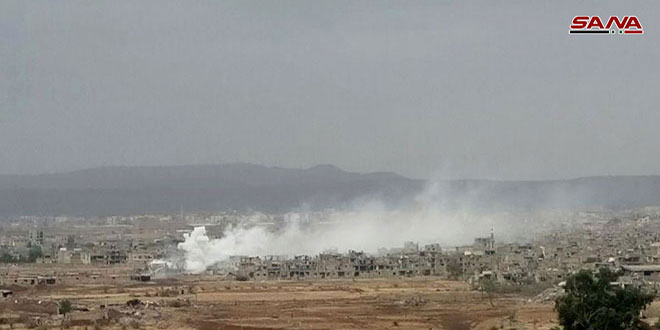 Damascus Countryside, SANA- The Syrian Arab Army units have achieved a new advance in pursuing terrorist organizations in al-Hajar al-Aswad  area as part of  the continued military operation to secure the area and uproot terrorism from southern Damascus.

SANA reporter said that the army units on Thursday advanced from different directions in the area towards the hotbeds and fortified positions of terrorists of the Takfiri organizations and took control of networks of tunnels and blocks of buildings in the area of factories.

Dozens of terrorists were killed as amount of their weapons, ammunition and equipment were destroyed during the military operations .

The reporter added that the army units, in coordination with the aerial monitoring, are carrying out accurate and complicated operations to dismantle and cut off the supply and communication lines between terrorists in the area.

The military operations of the army units will continue until control is regained over the south of Damascus, and consequently securing the neighboring neighborhoods which the terrorist organization target with shells.