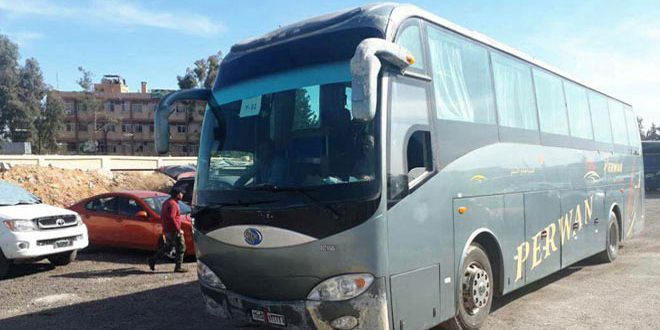 Damascus Countryside, SANA- 1130 terrorists of “ Jaish al-Islam” and their families have been evacuated aboard a number of buses from Douma city in eastern Ghouta in Damascus Countryside in preparation for the clearing the city of terrorists and the return of all the state’s institutions to it.

The buses left the city  under the supervision of the Syrian Arab Red Crescent and were subjected to thorough inspection to prevent terrorists from smuggling any civilians or military abductees, as well as to prevent them from hiding IEDs and bombs that they might use while traveling to Jarablos. 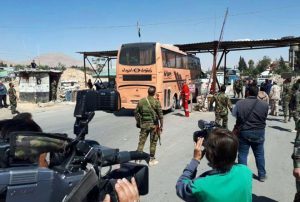 Earlier, during the evacuation of terrorists and their families form Jobar, Erbin, Zamalka and Ein Tarma, 30 men and 6 women with suicide belts in addition to a child who was booby-trapped with 5 kilos of explosives by terrorists were arrested. Those terrorists planned to blow themselves up in the buses or makeshift centers in order to accuse the Syrian state.

SANA correspondent said that the process of evacuating “Jaish al-Islam” terrorists and their families from Douma will be completed Tuesday in implementation of the agreement reached which provides for having “Jaish al-Islam” leave Douma and go to Jarablos, while those who remain will have their legal status settled and the state establishments will return in full to Douma city. 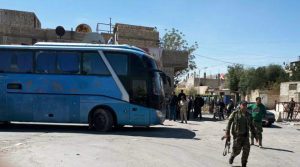 The agreement also stipulates for the terrorists to turn over all civilian and military abductees and the bodies of martyrs, along with handing over their heavy and medium weapons to the state.